The following history of Chandler is taken from the book, "The Chandler Area its History and People – 1880 – 1980."

The earliest documented inhabitants of the area known as Chandler were Delaware, Cherokee and Kickapoo Indians. These Native Americans led by Chief Bowles were defeated at Battle Creek in 1839. The battleground is located north of the Chandler city limits.

One of the earliest settlers in the Chandler area was Alphonso H. Chandler and his wife, the former Mary A. Brooks and their seven children. They came to the area in 1859 along with his brother, Haskell, and his family, and settled about one mile north of the present day downtown Chandler. They lived on the road leading from Athens to Tyler. He named the place Stillwater. In 1872 and  built  a general store at his farm home. The US Government issued a certificate for a post office in April 17, 1873. Mr. Chandler was the postmaster. 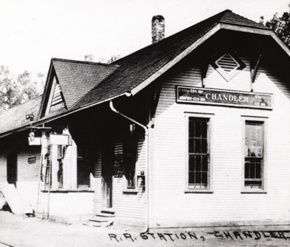 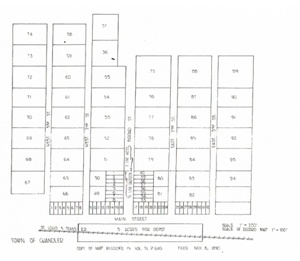 In the year 1880, the Texas and St Louis Railroad was being built through the area. Mr. Chandler was very interested in having this railroad go through or near his property and so he made the Texas & St. Louis Railroad a gift of the land if they would establish a depot permanently on the property. The railroad company named the new town Chandler. Land was also donated for schools, churches and a cemetery. The railroad brought new businesses, and the town quickly grew. The original depot was relocated to McCain Park in 2019 and renovated to display Chandler’s commercial history.
Mr. Chandler built a two-story brick building across the road from the depot at the corner of Broad and Main Street. He made his home on the second floor and the first floor was used as retail. The building burned in the 1920s. Mr. Chandler owned all the lots on the north side of the railroad and he divided it up into town lots. He named the streets and started selling and building a town.

The modern-day government of the city of Chandler began in 1960. At the time the first modern day mayor was Herman Cade. Chandler’s first early day Board of Alderman was led by his father John Cade.

From the very beginning, Chandler has been known for its community pride. Its citizens have always wanted to move forward, making progress. The leaders of the Town have always had a vision for the future. For this reason, Chandler enjoys many advantages and services that are unique for a community of its size.